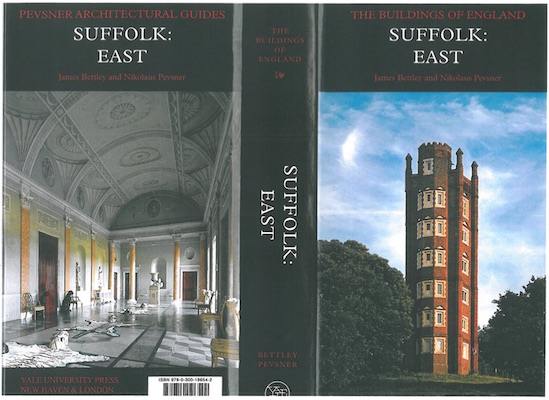 First release of the guide books for Suffolk in 58 years.

The last edition of the Pevsner Architectural Guide for Suffolk was published in 1957; so on hearing of the new releases, we at Nicholas Jacob Architects purchased them straight away. Both are fully revised by architectural historian, Dr James Bettley.

First published in the 1940s, the Pevsner Architectural Guides is a series of guide books to the architecture of notable buildings in the British Isles, by art historian, Sir Nikolaus Pevser.

We are delighted to see that several of Nicholas Jacob Architects’ Suffolk projects are covered in the new Suffolk: East guide.

Some extracts from the books:

Hoxne – Hoxne Hall
‘Flint pebbles, with dressings of thin, locally made red bricks, Gabled front with stepped three-light window, above it a roundel depicting the capture of King Edmund beneath Goldbrook Bridge, and on the apex of the gable a statue of him, both by Harry Hems. Enlarged in matching style by Nicholas Jacob Architects, 1999-2000.’

‘Certainly the most spectacular church in Ipswich… …’
‘…a flushwork-panelled front and three niches above the entrance, all restored. Lion stops to the hoodmould dated 1993, part of a major programme of repairs to the church by Nicholas Jacob Architects completed in 1996.’

Bury St Edmunds – Abbey
‘The w front was restored as five houses by Nicholas Jacob Architects, 2005-6. Their backs are a charming jumble of medieval and later work, and the w end of the nave and aisles is still largely buried under their gardens…’

Yaxley – Yaxley Hall
‘Conventional sashes and pedimented doorway on the ground floor. Above them, two small windows and one large Gothick window. The latter has an ogee top and is an accurate replacement by Nicholas Jacob, 2006, of the original that was taken out in 1905.’