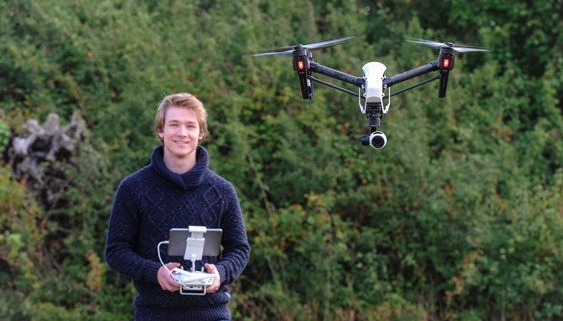 Drones were once the remit of military operations. Now they are being used daily across a range of industries, including architecture. Here Shaun Soanes looks at how they can be used safely and effectively.

The world is experiencing a proliferation of smart, small, and inexpensive products designed to make life – and work – easier. Drones are among these.

Now these Unmanned Aerial Vehicles not only provide our troops with a 24-hour “eye in the sky” – they also capture footage at sporting events, for films and advertisements and are making many of our jobs easier. They have been widely adopted in agriculture to monitor crops, in search and rescue missions for locating missing persons and to deliver medical supplies in war zones.

And that’s not all. Companies such as Amazon have even been looking into developing drones which can deliver packages to people’s homes after they order online.

Like 3D printing and the increased use of robotics, drones also promise to revolutionise the way architects, designs and construction professionals work. After all, their flying ability makes them perfect for conducting surveys on buildings that are either difficult to get to on foot, or which present a risk to health and safety. Restoration projects and work on renovation projects can use drones equipped with cameras to safely view hard to reach places.

Additionally, drones can help architects with visualisation – an essential part of any building project which provide a succinct and accurate way for others to see a proposed building design.

Who is doing what?

The most popular application for small drones is aerial photography and video capture. Seattle-based SRG Partnership used the technology to document its Center for Student Success at South Puget Sound Community College in Olympia, photographing an atrium running the full length of the building daylit with skylights and clerestory windows. Using a small UAV, the team was able to capture the daylighting feature as well as highlight key building elements from various angles and elevations.

Drones were also used in a collaborative project between roboticist Raffaello D’Andrea, Swiss architects Gramazio & Kohler, and the Federal Institute of Technology Zurich to look at flight assembled architecture.

Completed in France in 2012, the project involved the placement of 1,500 foam bricks to create a six metre tower. The project was carried out entirely by drones, and without human interaction.

Getting to grips with drones

In 2014 Robert Knowles, a man from Barrow-in-Furness in Cumbria, was convicted for ‘dangerous’ use of a recreational drone after he lost control of the aircraft near a nuclear submarine facility. Mr Knowles was fined £800 and ordered to pay costs of £3,500 at the Furness and District Magistrate court, after being prosecuted by the Civil Aviation Authority (CAA) for flying a drone within 50 metres of the Jubilee Bridge on the Walney Channel and flying over a nuclear installation, the BAE System submarine-testing facility.

The rules governing the use of drones is still evolving but for commercial use there are already some specific safety rules relating to the way they are operated, which are underpinned by UK law. The regulations are contained within the Air Navigation Order 2016 (ANO 2016).

Just because drones are now widely available to use for commercial purposes, it does not mean that anyone and everyone can fly them. Just like many other devices, they can cause injury or damage if they are not used responsibly.

We’ve seen ambitious predictions for the use of drones on construction sites but we are yet to see the extent of their practical use for architects.

It could be a while before we see programmed drones build entire habitable buildings but they are undoubtedly collecting useful data and creating amazing visuals. There is also the possibility to outfit drones with high-definition cameras, infrared scanners and thermal sensors that allow for gathering important data that can affect a project as early as the design phase.

We look forward to seeing how this trend develops.

Bus stop leads the way to 3D printing in construction