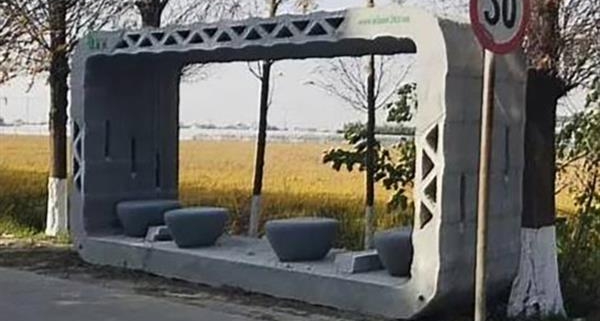 This month a really ugly bus stop has become a hot topic of conversation in design and architecture circles. Here Shaun Soanes explains why.

It is, essentially, a grey, rectangular box. But there is a lot more to this unattractive bus stop in China than meets the eye. It was built using a 3D technique in which material is joined or solidified under computer control to create a three-dimensional object.

The company behind it – WinSun Construction – used concrete and recycled waste materials to create the structure in just one night at its plant in Shanghai. It was then installed on a road in the town of Fengjing in China’s Jinshan District.

Three-dimensional printing was invented by American engineer Chuck Hull in 1986 when he worked out how to link molecules using laser light to form polymers into solid shapes. Initially, industries such as automotive manufacturing used the technology for what became known as rapid prototyping. The advantage was that no moulds were required and there was no waste. But now more industries – including construction – are sitting up and taking notice.

In 3D printing, objects are constructed layer by layer. Materials used in 3D printing range from the more common synthetic resins and plastics to steel and concrete. Some are experimenting with natural materials such as bamboo, wood and natural stone waste.

Currently, the integration of 3D printing into design and construction is in an exploratory phase but designers are constantly working on pushing the limitations on printing at the scale needed to create walls.

China is leading Asia in making the most of this technology. But just as the ability to 3D print cells has not led to the creation of fully functioning organs, neither have the Chinese worked out how to 3D print a complete building. Yet.

So far, the bus stop is the closest they have come to creating one seamless shape. Before that there was Vulcan, a pavilion, which was unveiled during Beijing Design Week 2015. It was designed by architects Xu Feng and Yu Lei but it was not printed all in one piece. Its curved form was assembled from 1,023 individual components, all produced by a printer.

Although this achievement was rewarded with an entry in Guinness World Records, it demonstrated the current limits of 3D printing technology.

The rise of AI

In a recent blog by Pippa Jacob, we took a look at the rise of the robot bricklayer – an American invention designed to solve the problem of the skills gap. Dubbed SAM100, he builds walls six times faster than a human bricklayer and can lay 3,000 bricks per day using its combination of a conveyor belt, robotic arm, and concrete pump. But as Pippa pointed out – is it always in our best interests to substitute technology for humans?

The enthusiasm for 3D printing is no different than our worship of other technologies. We are easily impressed by anything that does a job for us. But there are a lot of questions we should be asking about how it will be used and who will be impacted.

There is a myriad of ways in which 3D printing in construction could provide enormous benefits but there are other issues here regarding replacing people with machines and there is still a long way to go to understanding how traditional building materials, techniques, and aesthetics will be impacted.

Just because 3D printing can be used, does not necessarily mean that 3D printing should be used.

China are not the only ones pressing ahead. A bridge construction project in Amsterdam is also underway using 3D printers. It will be constructed on-site at the Oudezijds Achterburgwal canal but it has been printing in a nearby hall since Autumn 2015. The creators are attempting, by trial and error, to find ways to print the structure all in one piece.

Meanwhile, in a collaboration between the University of Naples and cutting-edge technology company WASP (World’s Advanced Saving Project), the beauty of Italian architecture is meeting modular building techniques with the development of a concrete support that could be made on a 3D printer and used in building projects.

Finally, Russian manufacturer Specavia has been using 3D concrete printers to create complex shapes for all kinds of towers, arches, dwarf partitions and other decorative elements for a house.

It will be fascinating to see how this technology continues to change our buildings at home and abroad – even if right now all we have to marvel at is an ugly bus shelter.

Archaeology is a consideration in construction