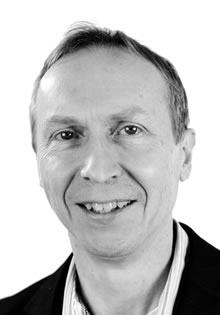 At NJ Architects, we are lucky to work with some talented people who make our team truly fantastic. In a series of blog posts we are introducing you to some of them and finding out more about their inspirations and aspirations. Next up is Hugh Bunbury.

Why did you want to become an architect?

I suppose you could say that I am of the Meccano generation, and even just as a child I was always absorbed in building something.

What is your educational background?

For my architectural studies I chose Oxford Polytechnic and as part of that I took a “year out” job at Buckinghamshire County Council in the Architects’ department. The salary was £3,000 a year which I thought was very good. Soon after I qualified, I saw a vacancy at the Suffolk office of Peter Cleverly, whose work fitted my aspirations exactly.

What was the first project you worked om?

My first building was on the family home which involved re-ordering the garden entrance. That was roughly 40 years ago and the house has since twice changed hands without my alterations being removed – so it must have been a good solution.

Which buildings around the world inspire you most?

All large scale Classical edifice make me stand and stare, and I particularly admire the Doric order.

I also like a building that offers something for the eye at all distances whilst drawing one in to the detail as well. That can be said for historic architecture as much as modern.

What are some of your favourite projects you have worked on over the years?

A few years ago we refurbished The Athenaeum in Bury St Edmunds which I enjoyed. It was a complex building both historically and spatially, and there was a strict timescale so a lot of pressure.

Are there particular architects whose work inspires you? Who and Why?

I’d like to spend more time studying the Arts and Crafts era of Mackintosh, Baillie Scott and Voysey. They were so modern but grasped the psyche of the ideal home.

What types of projects most excite you and why?

The “behind the scenes” areas of large building can be hugely interesting. Early in my career, I remember being sent to record the rainwater system or a large country house which sent me into the basements and roof voids that visitors don’t see.

What advice would you give to people starting out in a career in architecture?

You need to be good at verbally communicating: without that you won’t be able to get your best ideas across to planners, builders, clients and so on.

The ability to draw is obvious, but it isn’t enough on its own. Understand that creative design only occupies a small part of the job.